Posted at 12:41h in Archive by CreativeTeam

When a little girl in Tallinin [Estonia] asks her Dad for a blue bicycle for Christmas, the consequences are felt in a provincial Danish town.

Deliriously wry and so perfectly balanced it should become a case study in script classes, Riders of Justice may be the film that finally gives Anders Thomas Jensen international recognition beyond his usual spotlight as a sought-after screenwriter.

Comparisons with the Coen brothers will be inevitable given oddball characters whose fixations and genuine heart contrast with moments of extreme violence, yet the roots of this black revenge comedy go back even further, bringing an asocial spin to classic screw-ballers where a group of quirky misfits are balanced out by a lone woman who’s the most put-together and in touch of the bunch.

Jensen (Adam’s Apple, Men and Chicken) works with his customary stable of actors, many of whom have appeared in his previous four features including Mads Mikkelsen, the most globally recognized of the group and currently enjoying quite a year between this and Another Round.

There’s something unexpected at the end of practically each sequence, which is only fitting given how ‘Riders’ is premised on an analysis of probability and predictability. Every action in our lives, whether deliberate or by accident, has a chain of consequences; when the concept is picked up by men with obsessive-compulsive disorders, the conclusions become a driving force that lead down progressively dangerous paths.

It all starts with a stolen bike, whose setup is filmed like a Christmastime fairy tale, complete with The Little Drummer Boy on the soundtrack. The far-reaching knock-on effects of that banal theft take the viewer down a path of skewed logic that’s deliciously, blackly entertaining.

That bike belongs to teenager Mathilde (Andrea Heick Gadeberg), whose mother Emma (Anne Birgitte Lind) is about to drive her to school when she gets an overseas call from her soldier husband Markus (Mikkelsen) saying his desert deployment will last another three months. To combat their disappointment, Emma suggests Mathilde skip school for some mother-daughter time. On the metro, Otto (Nikolaj Lie Kaas) gives up his seat to Emma. Shortly after, the train crashes and 11 people, including Emma, are killed. Markus, already emotionally shut down and suffering from war-related PTSD, returns home but is little comfort to Mathilde, rejecting offers of counselling for them both from mental health professionals.

We saw Otto shortly before the tragedy, making a disastrous presentation with Lennart (Lars Brygmann) to a company board about an algorithm he designed to predict the future. Otto’s OCD behaviour manifests itself through a fixation on probabilities, so when he becomes convinced that the crash was no accident, he ropes in fellow misfits Lennart and Emmenthaler (Nicolas Bro) to “prove” that the crash was masterminded by a criminal gang called the Riders of Justice in order to rub out a turncoat and his lawyer.

They take their “findings” to Markus, whose frozen military mindset starts him strategizing ways to bump off the gang members. Like any good caper film, the plot becomes increasingly byzantine, drawing in Mathilde’s super-sensitive boyfriend Sirius (Albert Rudbeck Lindhardt) and a trafficked gay Ukrainian sex slave named Bodashka (Gustav Lindh). At the centre of them all is Mathilde, unaware of the plot and thinking that Otto and company are therapists come to help her and her father deal with their grief. The resulting pile-up of misread signals as everyone aims to protect Mathilde while taking on a gang of murderous criminals is beautifully calculated for laughs, much in the way a Robert Riskin comedy generated humour out of Runyonesque characters bandying together as a bulwark against chaos.

Jensen goes one step further by tying all the improbabilities to theories of random cause and determined effect which he then marvellously, elegantly explodes. The film’s significant humour comes from amusingly implausible situations coupled with rapid-paced droll dialogue; its equally sizable heart derives from the script’s respect for society’s outcasts and Jensen’s way of nimbly endowing every character with their own emotional backstory, all in need of healing.

Part of the magic also comes from the performers’ familiarity with each other, and the pleasure they take in the ensemble — on numerous occasions viewers half-expect to see the actors lose character and burst into laughter. Mikkelsen’s Markus is the most inexpressive of the lot, his deep-seated trauma disconnecting him from emotions apart from anger, yet the pain on his distinctive, grizzled face makes the character far more than an automaton. Within all this, Heick Gadeberg is an ideal foil, making Mathilde the most real figure without ever becoming a mere straight-woman to the craziness around her.

The film’s playfulness extends to its visual design, bookended by Christmas scenes marked by saturated colours and precious quaintness that quickly flip to a cooler, darker realism. Unsurprisingly given Jensen’s formation as a writer, the editing privileges the script’s liveliness, allowing all the actors the scope they deserve. 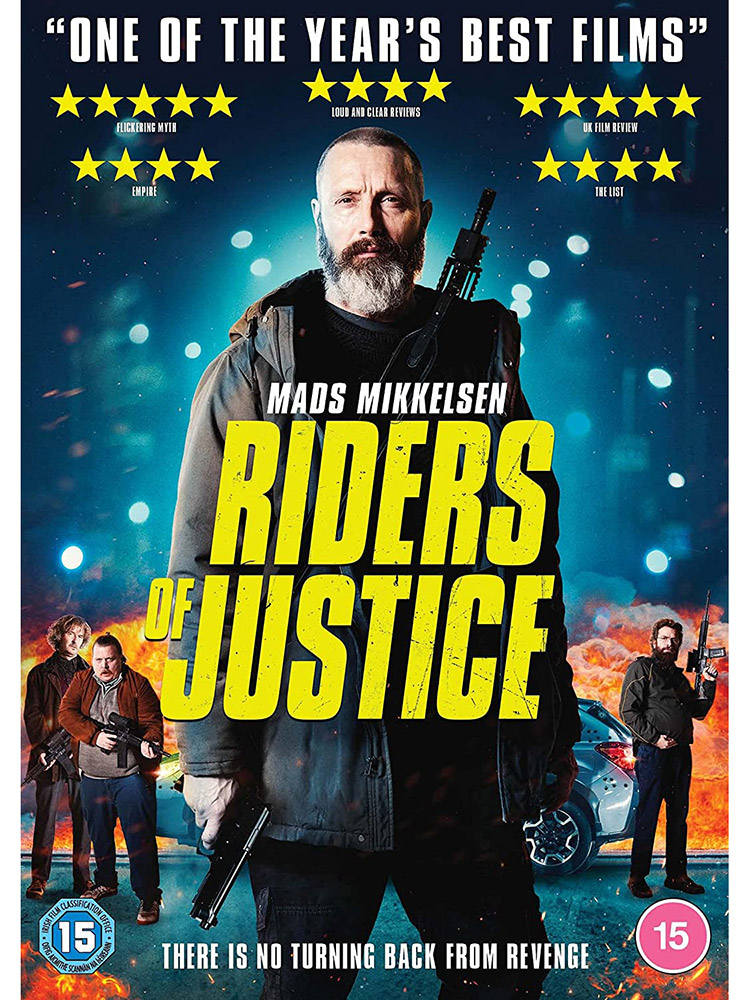