Posted at 11:38h in Archive by Neill Ustick

In this tragi-comedy, a poor yet united family bluff their way into the lives of a wealthy Seoul household.

The ideal way to experience South Korean auteur Bong Joon-ho’s awards-garlanded, international box-office smash is with as little prior knowledge as possible. At the risk of adding to the hype, Parasite really is the kind of remarkable experience that makes modern movie-going such a joy.

Described by its creator as ‘a comedy without clowns, a tragedy without villains’, Parasite is more Shakespearean than Hitchockian – a tale of two families from opposite ends of the socioeconomic spectrum, told with the trademark genre-fluidity that has seen Bong’s back catalogue slip seamlessly from murder mystery, via monster movie, to dystopian future-fantasy and beyond. We first meet the Kim family, headed by father Ki-taek (Song Kang-ho) and mother Chung-sook (Chang Hyae-jin), in their lowly semi-basement home, hunting for stray wifi coverage and leaving their windows open to benefit from bug-killing street fumigation. They have nothing but one another and a shared sense of hard-scrabble entrepreneurism. So when son Ki-woo (Choi Woo-shik) is faced with an unexpected opportunity to home-tutor a rich schoolgirl, he gets his gifted artist sister, Ki-jung (Park So-dam), to forge a college certificate, bluffing his way into the job and into the home of the Park family.

An architectural wonder perched high above the slums of Seoul, with views not of urinating drunks but of luxurious lawns and starlit skies, this wealthy house is everything the Kims’ pokey dwelling is not: elegant, angular and weirdly isolated. While aloof businessman Mr Park (Lee Sun-kyun) is at work, his anxious, uptight wife, Yeon-kyo (Cho Yeo-jeong), tends to their coquettish daughter and hyperactive young son. It’s a lifestyle that relies upon hired help: tutors, a chauffeur and, most importantly, a devoted housekeeper Moon-gwang (Lee Jung-eun), who stayed with the building after its original architect owner moved out. Spying an opening, Ki-woo (newly dubbed ‘Kevin’) realises that his own family could easily fill such roles, and hatches a plan that will inveigle the Kims into the privileged lives and home of the Parks.

The Kim family may live in sewage-flooded squalor, but they are clearly every bit as smart as, and a lot more united than, the Parks, who turn their noses up at the smell of ‘people who ride the subway’. Similarly, while the smug Mr Park is habitually depicted ascending the stairs of his ultra-modern home, and the Kims are pictured scampering down city steps to their own underworld apartment, it’s clear who holds the dramatic high ground.

When it comes to deception, too, those on the upper rungs of the societal ladder are as practised as those upon whom they look down. In a world of vertical non-integration, Parasite finds gasp-inducing depths lurking beneath even the most apparently placid surfaces.

Perfectly accompanying the film’s tonal shifts is Jung Jae-il’s magnificently modulated music, which moves from the sombre piano patterns of the curtain-raiser, through the mini symphony of The Belt of Faith to the cracked craziness of cues in which choric vocals do battle with a musical saw. Just as the action can segue from slapstick to horror and back – sometimes within the space of a single scene – so Jung plays things straight even as madness beckons, ensuring that the underlying elements of pathos are amplified rather than undercut by pastiche.

For me, Parasite is best described as a melancholy ghost story, albeit one disguised beneath umpteen layers of superbly designed (and impeccably photographed) generic mutations. Thrillingly played by a flawless ensemble cast who hit every note and harmonic resonance of Bong and co-writer Han Jin-won’s multi-tonal script, it’s a tragicomic masterclass that will get under your skin and eat away at your cinematic soul. 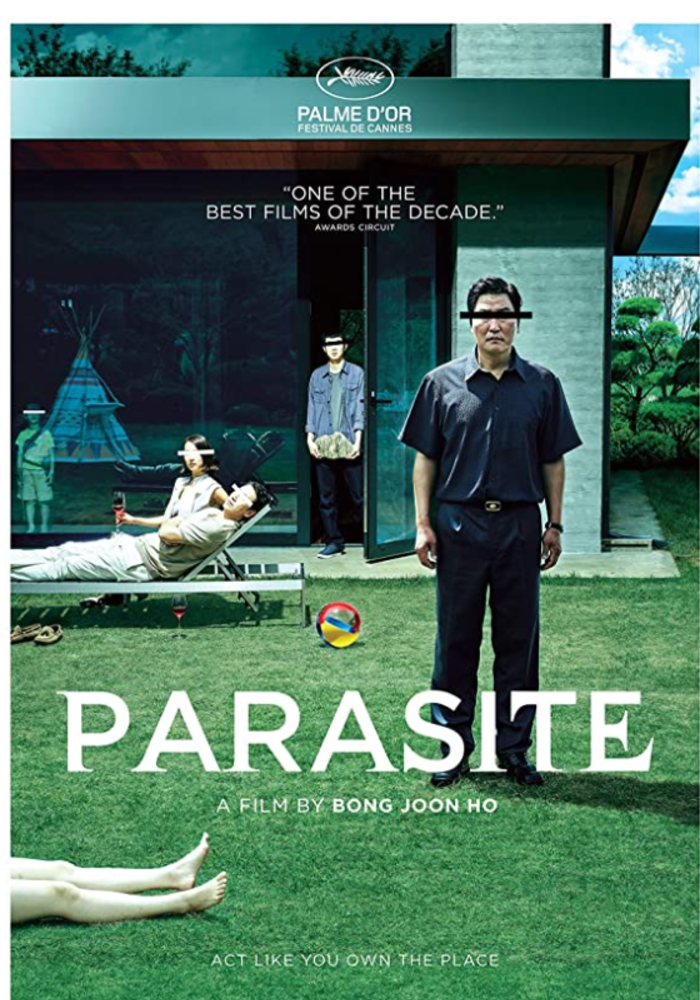