Posted at 12:33h in Archive by Neill Ustick

Lucky is a cantankerous 90 year old living alone in a small New Mexican town. Starring Harry Dean Stanton in his final performance, Lucky is essentially a film about an old man who is both Stanton and played by him, coming to terms emotionally and philosophically, with the inevitable end of his days.

Lucky begins with series of shots of the Arizona desert: broken-backed hills, cacti reaching for the sky. It locates a tortoise crawling on the ground. This is President Roosevelt, whose predicament we’ll learn about in due course. Then it settles on a human equivalent of that tortoise: the title character, Lucky, played by then-89-year old Harry Dean Stanton, who died mere weeks before this film’s commercial release.

Over the course of the next 88 minutes, we spend almost every moment in the company of Lucky. Lucky is a long-retired World War II veteran. He has friends but is often brusque and impatient with them. He has a routine, and as for many older people, it gives shape to his days.

He walks around town and stops in the local coffee shop, where he talks to the head cook (Barry Shabaka Henley) and a particular waitress, Loretta (Yvonne Huff), who takes an almost daughterly interest in his well being. Lucky goes to his favourite bar and drinks and talks to the owner Elaine (Beth Grant) and her husband Paulie (James Darren, of TV’s “T.J. Hooker” and several “Gidget” films). They argue amongst themselves and with other patrons about philosophy, morality, religion, game shows, etc. We see a lot of Lucky at home, often in his baggy underwear, doing yoga exercises and smoking cigarettes (he has a pack-a-day habit, has had since he was a teenager).

Lucky is filled with frank talk about primal subjects. This is often framed as banter, or enclosed within routine events such as a random conversation in a restaurant (Tom Skerritt plays another World War II veteran; he’s too young for the part but you believe him anyway) or in a doctor’s office (Ed Begley, Jr. plays Lucky’s physician—what a treasure trove of actors this film is). But the story’s deeper meanings reside in its images of Harry Dean Stanton moving at a tortoise’s pace through a series of sun-drenched, Western-styled panoramas (the soundtrack often playing a solo harmonica version of “Red River Valley” performed by Stanton), or making his way from the entrance of his favourite coffee shop or bar to his customary seat.

This movie is about death, of course, and fear of death, and health, and loneliness. It’s about the choices not made and the roads not taken: Lucky has a lot of regrets, but you often have to deduce what they are, because he’s the kind of crabby old eccentric who’d rather get into debates with people than just talk to them. (Other people talk more openly than he does, often as a means of trying to get him to open up and be vulnerable, which is really not his style.) Much is made of Lucky’s atheism, which complicates his defiant attitude towards the inevitable approach of death.

The movie is also about friendship, especially as emphasised in Lucky’s conversations with his buddy Howard, played by David Lynch as a dandy in a cream-coloured suit, white fedora and red ascot. Howard is distressed about the disappearance of Theodore Roosevelt, his beloved, ancient tortoise. Lynch directed Stanton in many projects. There’s an extra-dramatic thrill to watching these two, who have known each other for at least thirty years, play old friends. Lynch holds his own: whether he’s as fine an actor as Stanton or simply a good friend to him is a moot point. Either way, love and respect are present in every moment.

Lucky is the kind of guy whose capacity to make new friends either went dormant or switched off at a certain point. He’s as surprised as anybody when he finds himself opening up to younger people, including Loretta, who has issues of her own, and a young insurance agent played by Ron Livingston, whom Lucky despises immediately but who opens up suddenly, almost desperately, like a drowning man begging for someone to pull him from the water.

The movie was written by Logan Sparks and Drago Sumonja, and directed by longtime actor turned filmmaker John Carroll Lynch (of “Fargo”, “Zodiac” and other films too numerous to mention—he’s another Stanton in the making). I’ve seen a lot of movies that try to be “Lucky”—movies about eccentric people in a small town or neighbourhood who hang out in bars and coffee shops and have conversations—but very few that have this film’s elegant shape, its sense of when to hang back and listen and when to let the camera tell the story, and when to end a thought and move on to the next one. There’s a long scene of Lucky smoking cigarettes at night and thinking. The soundtrack plays Johnny Cash’s “I See a Darkness,” one of many late-career classics in which the singer faced the certainty of his own death. The sandblasted terrain of Stanton’s face in this scene constitutes a movie within a movie, a life revealed in contemplation. It’s one of the most powerful things I’ve ever seen. I felt that way before Stanton left us. I feel it even more keenly now. 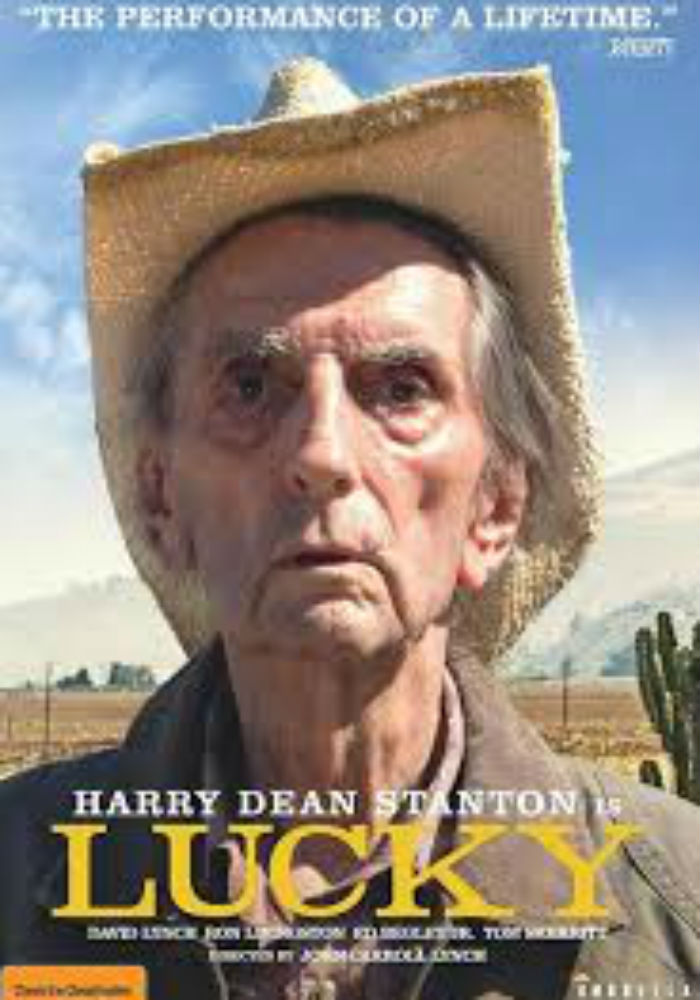