Posted at 15:12h in Archive by CreativeTeam

Winfried (Peter Simonischek) doesn’t see much of his working daughter Ines (Sandra Huller). The suddenly student-less music teacher decides to surprise her with a visit after the death of his old dog. It’s an awkward move because career woman Ines is working on an important project as a corporate strategist in Bucharest. The geographical change doesn’t help. Practical joker Winfried loves to annoy his daughter with corny pranks. What’s worse are his little jabs at her routine lifestyle of long meetings, hotel bars and performance reports. Father and daughter reach an impasse, and Winfried agrees to return home to Germany. Enter flashy ‘Toni Erdmann’: Winfried’s smooth-talking alter ego. Disguised in a tacky suit, weird wig and even weirder fake teeth, Toni barges into Ines’ professional life, claiming to be her CEO’s life coach. As Toni, Winfried is bolder and doesn’t hold back, but Ines meets the challenge. The harder they push, the closer they become. In all the madness, Ines begins to understand that her eccentric father might deserve some place in her life after all.

Acclaimed with awards and showered with positive reviews though it is, Toni Erdmann has somehow missed out on making me a fan, despite the excellent performances and its quirky qualities – notably the central character, a father who disguises himself and plays prankish jokes on his daughter. The outer clown has a profound purpose: to connect with his daughter, get through her guard.

Almost throughout its lengthy run time of almost three hours, Toni Erdmann, the alter ego of Winfried, plays an embarrassing game which confounds appearances; it bursts through and makes a link in their relationship. But the worst part is that I couldn’t connect with either the characters or the story. I don’t really care about them … hence my ennui.

Almost obsessively focused on this father-daughter relationship, the film has an austere mood, despite the seemingly amusing antics of the wig wearing, fake toothed Toni. Some scenes are arresting for their audacity and the writing is observant, if – to me – a tad laboured.

Maren Ade’s skills as a filmmaker are evident, though, and I would urge you to not take my reservations to heart; maybe I just don’t get it.

The dysfunctional relationship between father and daughter is the focus of German filmmaker Maren Ade’s third film, a highly lauded and awarded comic drama that has many scratching their heads wondering what the fuss is all about. One thing is sure. It is an unusual film. Oscar nominated for Best Foreign Language film, it’s long and the two central characters are not especially likeable. But if you can persevere through the film’s often frustrating first half, there is a pay off.

Ines Conradi (Sandra Huller) is a humourless businesswoman who lives and breathes her job. She is as stitched up as the conservative clothes she wears. By contrast, her father Winfried Conradi (Peter Simonischek), whose alter ego is Toni Erdmann, is a jokester who dons false teeth and wig at the drop of a hat and pushes the boundaries of propriety to uncomfortable limits. Ines has little time for her father. The two central performances are perfect.

The bittersweet journey begins as Ines’ non conformist father (as the overstated Toni Erdmann) imposes himself onto his daughter’s life, appearing unannounced and uninvited. Discomfort oozes like leaking gas. The fact that he appears at a time that is critical to her business compounds her stress.

The final hour is an exercise in film risk taking. It pays off. Around the film’s half way mark, things change. We suddenly see a different side of Ines and learn something about her personal life. The pace changes, as does the situation. It is best to discover the surprises for yourself. Our journey is one that jolts from shocks to moments of surprising poignancy. Ade’s film is replete with detail; it is the careful attention to detail that allows the characters to become three dimensional and real. After all, it is about the minutiae of a relationship.

The direction shift and how the characters change the road on which they are travelling is artfully done. A key plot point surrounds the question that Ines asks her father about what makes life worth living. Toni Erdmann may not offer the answer to the 64 million dollar question about the secret of happiness, but it does resolve the issue for this father and daughter. 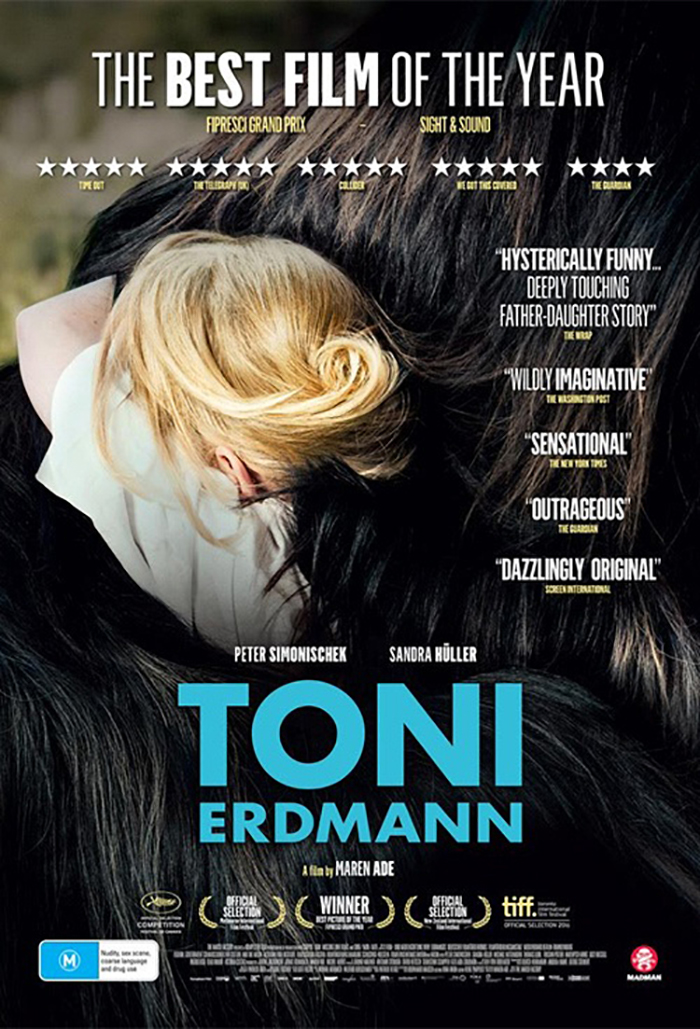