Posted at 15:06h in Archive by CreativeTeam

The poignant new feature from writer/director Mia Hansen is a resonant and affecting portrait of a fifty-something woman who, after living comfortably for many years, must suddenly re-invent her life, when her husband announces that he’s leaving her.

In Mia Hansen-Løve’s Things to Come, Isabelle Huppert plays Nathalie Chazeaux, a passionately dedicated high-school philosophy teacher who’s also a devoted scholar – the author of a highly regarded textbook and the editor of a respected series of philosophical monographs. She’s been married to another philosophy teacher, Heinz (André Marcon), for 25 years; they have two thriving children, a son and a daughter, who are on the cusp of adulthood. But then things start to fall apart. The world that Nathalie has constructed for herself begins to collapse in on her, and what she can salvage from the wreckage forms the very core of the film.

The film stays close to the modest practicalities and arm’s-reach ambitions that concern Nathalie while putting a few counterweights of idealistic passion into the balance. En-route to the classroom, she’s momentarily blocked by students protesting changes in the government’s retirement policy; inside, she gives a lesson that involves a quotation from Rousseau about democracy; and, on the way out, she’s visited by a former student, Fabien (Roman Kolinka), a talented young philosopher who writes for her monograph series but has dropped off the academic track in order to form an anarchist commune with his friends on a farm in rural France.

Meanwhile, Nathalie’s settled existence is wrenched toward chaos by the confused terror of her elderly mother, Yvette (Édith Scob), a former model, now working occasionally as a movie extra, who is in physical, mental, and emotional decline. After Yvette’s rapid decline and sudden death, Nathalie must make the funeral arrangements, and, strangely, her relatively formal discussion with the priest delivers a crucial vision of the world according to Nathalie, and according to Hansen-Løve as well. Nathalie gives the priest (who didn’t know Yvette) a brisk overview of her mother’s life story, which the priest distills into bland homiletics at the funeral; as for Nathalie, she speaks at the cemetery, reading aloud from Pascal’s Pensées but adding not a word of her own in tribute to her mother.

What’s more, after her separation from Heinz, her quietly bitter astonishment morphs into defiant anger only after she notices that he has taken, from their home’s highly packed bookshelves, some books of hers that also contained her notes. Also, Nathalie’s editorial projects fall apart; her publisher, bending to the market, won’t renew her textbook and won’t continue her series of monographs. It’s as if Nathalie’s prodigious learning has taken the place of her own emotions, her own experience, and, stripping her of her books, Hansen-Løve proceeds to inflict pain and suffering on Nathalie in an effort to see what remains of her essential self.

The answer that the filmmaker ultimately delivers could as well come from another French classic, Candide, which Voltaire ended with the phrase “we must cultivate our garden.”

Whether it’s the dollhouse-like school where Nathalie teaches or the august one where Heinz works, the manicured streets and parks where she talks with Fabien and where she takes her students for an informal class, or even the ferry and the monuments that dominate the landscape with culture and history, the infrastructure of modern life, as much intellectual as material, comes to the fore to mock the very notion of a natural purity awaiting revelation. Nathalie’s true self is something outside herself—it’s her job and her family, her learning and her talk, the outer face of her inner life. Yet this very realm of intimate activity is itself another illusory mode of autonomy, one that’s no less of a ruse than the anarchy of Fabien’s commune.

It’s as if, in dramatizing the unchallenged comforts and practicalities of Nathalie’s way of living and working, Hansen-Løve were dramatizing her own place in the French film world and, for that matter, justifying her own calm and externalised, unoriginal yet heartfelt, intelligent and empathetic artistry. The great merit of Things to Come is in its construction of the network of associations and activities that bind Nathalie to the world around her. That world, and the moral trials imposed by its sudden absence, is where the filmmaker’s passions and pleasures are found. Yet Hansen-Løve never gets to the soul of her protagonist—her film comes to life with Nathalie’s own activity but doesn’t reveal much about her in repose beside her baseline sense of humane decency.

Hansen-Løve doesn’t get to the material heart of the matter, either—the financial and administrative underpinnings of the French culture industry, which she did in fact unfold in fascinating detail in the first half of her film The Father of My Children [2009]. In Things to Come, the enormous infrastructure of French society, economic and cultural, is shown to aim at nothing more than sustaining the comfortable yet compassionate private normalcy that the movie depicts. But the individual furies and passions that the mighty machine of that infrastructure is created to harness—or to restrain—are left unexplored. 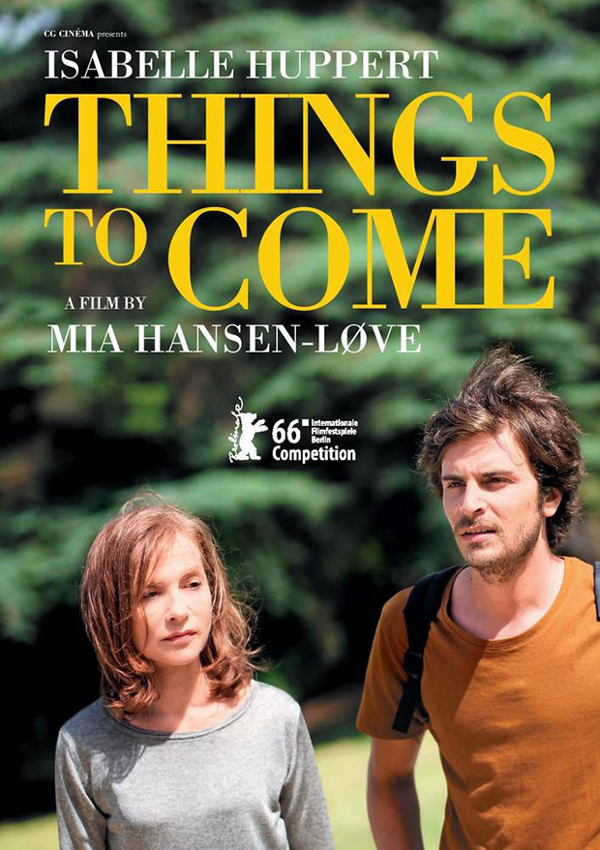