Posted at 12:09h in Archive by CreativeTeam

Having left her daughter Jessica (Camila Mardila) to be raised by relatives in Pernambuco, a small town in the north of Brazil, Val (Regina Case) works as a loving nanny for a well-to-do family in S‹o Paolo. Comfortably employed, Val feels a constant sense of guilt about Jessica. Everyone and everything in the elegant house has its proper place. When Jessica comes to the city to complete her university entrance exams, they reunite for the first time in 13 years but Jessica’s personality and candour upsets the unspoken yet strict balance of power in the household, with Val caught between the living room and the kitchen. She will have to make a choice.

Dynamics, relationships and lives change when a mother and her estranged daughter reunite in San Paulo after 10 long years. It is the upstairs downstairs element that colours everything and on which writer director Anna Muylaert focuses, as the film’s protagonist Val (Regina Case in a star turn) allows her live-in domestic status to impact adversely on her self esteem, judgement and most importantly, her relationship with her daughter. Muylaert has created a wonderful character study and like Sebastian Lelio’s 2012 film Gloria, that similarly crafts a portrayal of its middle aged central character (masterfully played by Pauline Garcia), this is a film in which performance and nuance is required to draw us into the world of the Second Mother of the title. This is a film in which the minutia matters as we become engrossed in the divergent worlds of the domestic and her employers.

The success of the film relies on our understanding of the role in which Val plays in the household of the well to do family for whom she has cared and served for the past 10 years. Muylaert carefully establishes everyday life in the home of domineering wife Barbara (Karine Teles), her meek husband Carlos (LourenŤo Mutarelli) and their insecure teenage son Fabinho (Michel Joelsas), who treats Val with more affection than he does his own mother. Val is the glue that keeps the dysfunctional family together: she reassures Fabinho he will not die a virgin, panders to the family for its food preferences, diligently does the domestics and instinctively feels she knows her place and what she can and cannot do.

Jessica (Camila Mardila) is the catalyst whose arrival changes the dynamic. While Carlos and Fabinho welcome the attractive teenager and encourage her to become part of the family, Barbara is instantly wary, antagonistic and resentful of her being treated as a guest and an equal. We feel Val’s discomfort as Carlos invites Jessica for lunch and Fabinho pulls her into the swimming pool to have fun. In all the years Val has resided with the family, she has never even been in the swimming pool – or sat at the dining table in the kitchen.

We see life from Val’s point of view until … The shifting of the perspective and direction of the narrative is cleverly done: we hardly know it is happening as the film leads into the direction of its satisfying resolution and conclusion. The final scene and the expression on Val’s face is unforgettable. Case and Mardila were jointly awarded the Special Jury prize at Sundance in 2015 for best actress, while Muylaert was nominated for the Grand Jury Prize having picked up a swag of awards at various festivals including San Paulo, Amsterdam, Gotenborg and Berlin.

Perhaps the most poignant moment in the film is also the fulcrum of what filmmaker Anna Muylaert is exploring: it’s a scene where Val (Regina CasŽ) is consoling and caressing Fabinho on his failure to pass the university exam. She has nursed him since childhood, being his nanny and second mother all these years, right beside his birth mother, Dona Barbara (Karine Teles), Val’s employer. When Barbara tries to do the same, her son awkwardly walks away.

In this dramatic parallel, while Fabinhno’s mother was physically with her son growing up, it was Val who was closer to him. Val, on the other hand, was physically distant from her daughter for a dozen years, earning the money to send back for her keep. Neither leads to satisfactory outcomes for the emotional well being of mother and child. That explains why the original title reflects a line of a child’s dialogue: when will she be back?

The sort of social barriers and compartmentalisations that are in place in Brazil (and other places) between the rich and the poor, the families and their servants, is unfamiliar territory for proactively egalitarian Australia. The distance to be kept between housekeeper/nanny and the family is much smaller in our cultures than some others. And this goes to what Muylaert explores with a calm but forensic focus. How can parents bring up children without affection and intimacy? The result is displayed symbolically and metaphorically in Fabinho’s failure to pass the exam, while Jessica scores 68.

Regina Case, one of Brazil’s most acclaimed actresses with a career spanning 40 years, carries the film on her shoulders (and her heart), in a performance that rightly has won many awards and nominations. The film itself also attracted much critical and audience praise, from its home town to Seattle and Sundance.

What I find noteworthy about this film is that you don’t fully realise its power until the ending. It subtly unfolds the emotional environment, elaborates on the characters and slowly builds to its satisfying, moving resolution without fanfare or cinematic hype. It’s left to the audience to make their own private fanfare. 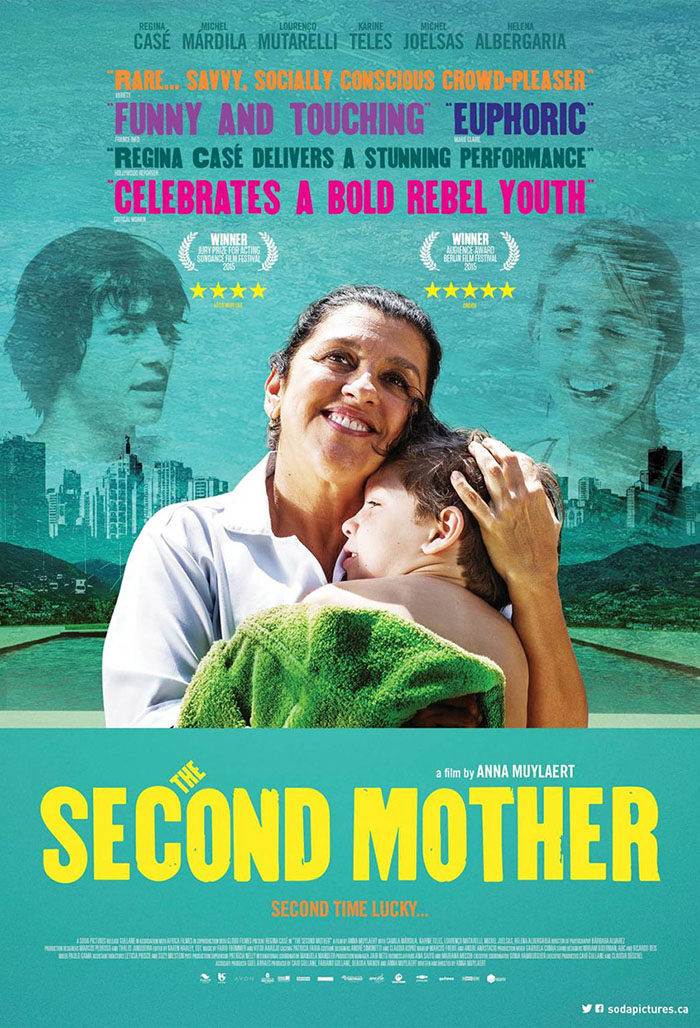